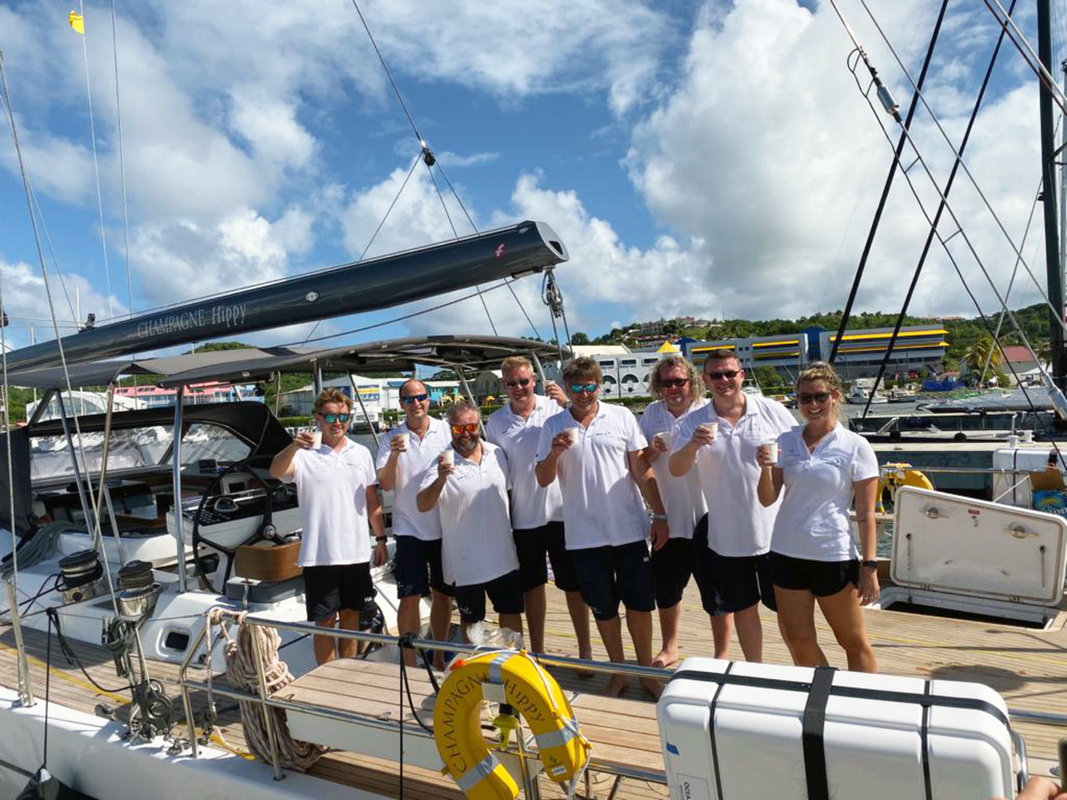 After months of fine tuning and arduously attending to our beautiful Oyster she was finally ready to face her maiden voyage as Champagne Hippy.

And what a voyage it was  - a team from Boats.co.uk put her to the test to reach The Canaries in time to take place in the illustrious Atlantic Rally for Cruisers (ARC).

Our transatlantic team including Olympic Yachting Champion, Alex Ali met us at the start of the race - We were cutting it fine but we made it, and managed to join the challenge as the last boat to leave.

It was tense, but determined to make up for lost time, we powered on south, hoping to catch promised trade winds and, eventually, we made headway, gained some speed and our 4 hour on, 4 hour off team shifts, peeled off the competition one by one.

Here are some of the journal extracts from the voyage:

"The wind continues to be very gentle, this makes it really pleasant to be on the boat, but we are not moving very fast. As one of the larger boats this affects us more than the lighter boats.

From a racing perspective, we have gambled to go straight down, then across which is longer, but the plan was to catch the trade winds. We are not there yet, but the trade winds are not blowing yet. Most boats opted to sail more diagonally south-west. Our plan seems to be working as we do have more wind than the others. We are currently sailing about 4 knots, but many are doing only 2.

Saying that we have just have a race update and lots of boats have started to using their engines rather than staying still. They are allowed to do this, but have to declare it at the end and are given a penalty.

We need to really be doing 10 knots to get to the end when we want. We are judging our progress against the 2 other Oyster 825's. One was crewed by a fanatical team - who are clearly in it to win it, we were in the middle then the other team ISNL. Since last night ISNL have steamed ahead of both of us, when they were in a area of low wind, so we can only assume they are using their engines as well."

"Today I spotted yellow fin tuna jumping as they were being hunted by a pack of dolphins which was very cool.

We are pretty alone at sea with only a few boats on the horizon. Weather is about 23 degrees so nice."

"This morning we saw our first whales. We think they were sperm whales about 20-30ft

It was pretty exciting to watch them swim along side for about 10 mins. They did not really surface, just sitting below the surface."

"We have just experienced out first squall. During the day, the sun heats the sea to form clouds, at night it gets cold and the system cannot hold the water so you get very localised very intense storms.

The wind went from 10 to 30 and it got very cold then it starts to bucket it down, I am soaked through but it is pretty cool. It lasted about 20 mins. The other things I am not sure I mentioned are the skies are stunning (when it is not hammering it down) - there are so many stars it is hard to see the constellations.

The final thing is the bioluminescent in the sea, as we go past certain alleges in the sea, they respond by flashing luminous green.  It looks like the blitz underwater. Then when a dolphin goes through it it leaves a bright green streak through the water that quickly fades."

It looks like we are going to struggle to keep our position against Albatross, but we have a few more days racing so anything could happen.

Well, we made it to the Caribbean, 15 days at sea, and came in 13th overall and as the first Oyster 825 in the race to finish - we were elated - Champagne Hippy had really pulled through for us.  On the lonely days she was home, in the hairy moments, she held her own and during the calm she gave us the most wonderful experience of a lifetime."

One life tick and back in time for the boats.co.uk Christmas Lunch!!